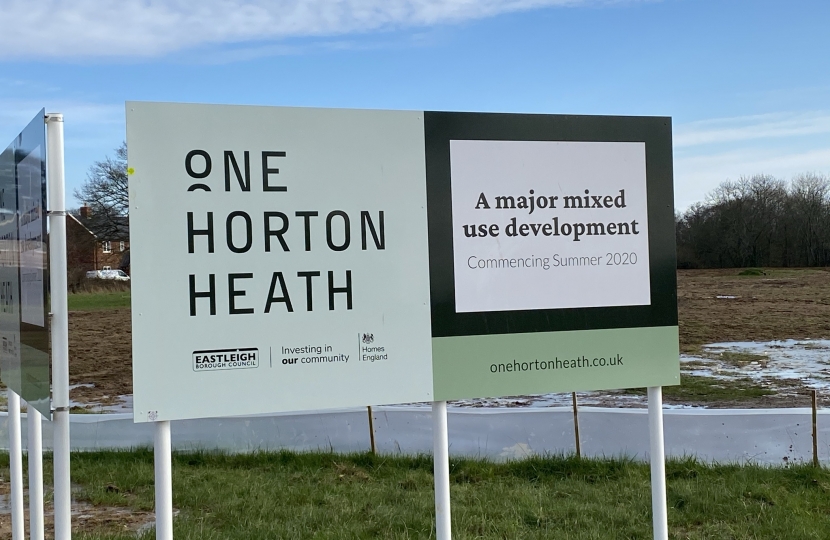 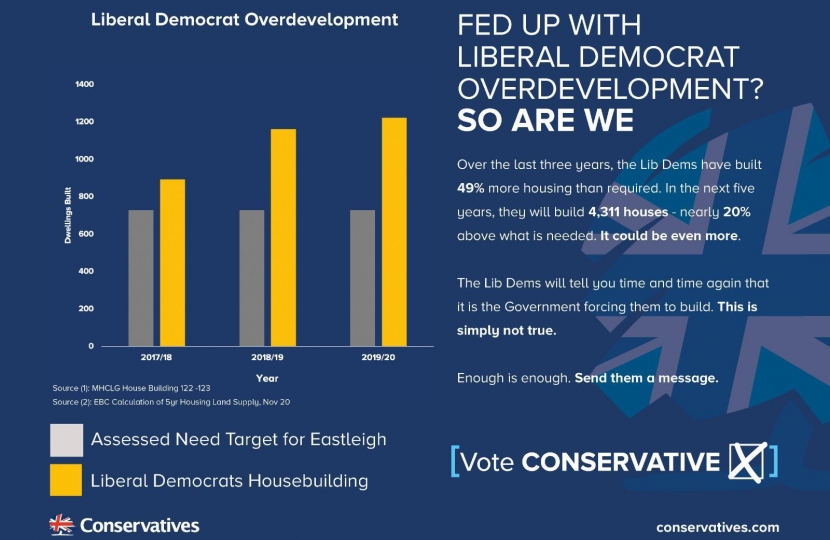 Flooding on Allington Lane and One Horton Heath Update 2

Below is my objection letter to the current One Horton Heath plans. Despite meeting with the Chief Executive of Eastleigh Borough Council in November 2020, and reviewing the application material in detail, I do not believe that Eastleigh Borough Council has brought forward a satisfactory application. My objection to the plans centre on three principal issues which are set out below. I will also be raising these concerns in Parliament on Monday.

The Council continues to build above and beyond the assessed housing need or the so-called ‘Government target’. As you are aware, Eastleigh Borough Council has a target of 694 homes per annum plus a 5 per cent buffer[1].

In the last three years (2017/18 to 2019/20), Eastleigh Borough Council’s assessed housing need or ‘target’ would have been 2,082 or 2,187 with a five per cent buffer. In the same three-year period, the number of new dwellings delivered by Eastleigh Borough Council was 3,278[2]. This means the Council has sanctioned over 1,000 additional dwellings to be built in the area, 49 per cent more than our ‘assessed housing need’ even including the five per cent buffer.

Given the over-delivery in previous years, I would expect to see a reduction in future years but this is not the case. The latest information published by Eastleigh Borough Council on its five-year housing supply (July 2020-June 2025) shows that the Council intend to approve 667 extra dwellings, equating to 18 per cent above target[3].

In light of Eastleigh Borough Council’s record and the proposed scale of One Horton Heath, my suspicion is that the Council will far exceed the 18 per cent target it is currently forecasting.

The village of Horton Heath is small and peaceful, and this development would destroy the character of the area while also undermining amenity for those residents that live there. Furthermore, the development also removes the obvious strategic gap between Horton Heath and Hedge End, a principle that is well established in the Council’s planning policies.

The area to the north of the One Horton Heath site, where the proposed link road will join Allington Lane is already susceptible to flooding and the scale of the proposed development could make these problems even worse. Both of the tributaries that meet where the flood risk issues occur run through the development site so surface and groundwater run-off from One Horton Heath will have a direct impact on the associated flood risk on Allington Lane and arguably increases ferocity and regularity.. This point is endorsed by the Environment Agency.

Moreover, the stated aim of Eastleigh Borough Council is that the site should deliver an ‘environmental net gain’. In relation to the watercourses, the One Horton Heath development does not return the current habitat to their original state so improvements to the watercourses running through the site are essential to achieve this objective. This in turn will also address the flood risk issues.

So far, Eastleigh Borough Council’s position as the developer and applicant suggests nothing should be done in relation to the flood risk and watercourses, because the site is already susceptible to flooding. This is not acceptable and falls well short of what would be expected of a private developer. It is even worse when we consider this is the response of our local council. It also directly contradicts the stated aims of the project:

“We want to protect local wildlife and preserve Horton Heath’s character as much as possible. Our ambition is that One Horton Heath will create a net gain in biodiversity. To achieve this, we’ve partnered with ecologists to tell us how we can protect natural habitats, green open spaces and invest in the site’s waterways” [emphasis added].

To conclude, I believe the current masterplan should be rejected as it represents excessive housebuilding, overdevelopment which will undermine the character of Horton Heath and it fails to appropriately mitigate the associated flood risks.  The fact that Eastleigh Borough Council are acting as the developer should not detract from the Council’s responsibilities as a local planning authority to act in the best interests of residents. I strongly encourage the Council to reject this application for the reasons that I, and other local residents, have set out.