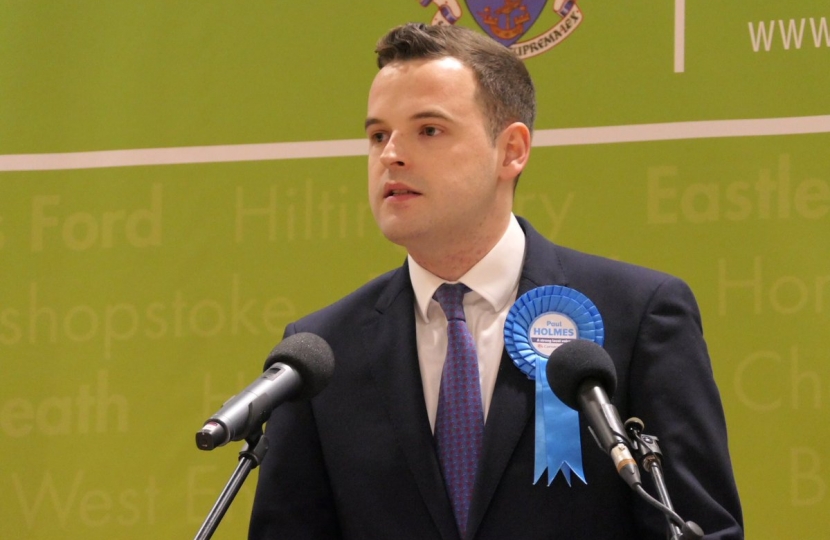 On 12th December Eastleigh residents voted for Paul Holmes to serve as their MP in Parliament. The Eastleigh result was declared at 2.32am.

On winning Paul said the following:

“It’s the honour of my life to have been elected as the Member of Parliament for Eastleigh. I don’t mind admitting it’s a daunting task but I will work every day to repay the trust my constituents have given me because I know that we politicians have trust to rebuild, scepticism to overcome and I in particular, have promises to deliver which I will attempt to do every day.

“This result shows I think, that the people of Eastleigh have voted to see their decision that they made in 2016 is delivered and as promised I’ll vote for the Prime Minister’s deal next week in Parliament so that we leave the European Union. [cheers from crowd]

“They also voted to see a new local approach for Eastleigh; more funding for our local schools; more police on our streets and an end to the over-excessive development we have in the constituency and of course working on the vital infra-structure we need in this constituency. The Conservatives will be returned tonight with a healthy mandate but I want to reassure everyone who has elected me that my first priority will, is, and always will be the people of Eastleigh and every day I am elected to serve this constituency I will repay their trust and hopefully over the next five years we can work together to make it an even better place.”